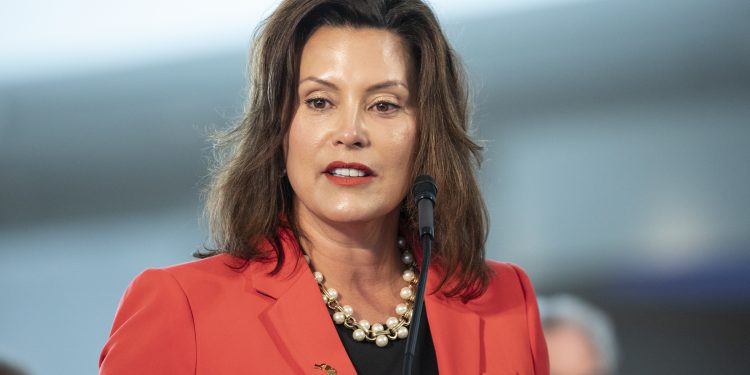 The poll numbers released yesterday by Marketing Resource Group state that Gov. Gretchen Whitmer’s disapproval rating was 34% in an October survey, up from 24% in June.

The poll numbers released yesterday by Marketing Resource Group state that Gov. Gretchen Whitmer’s disapproval rating was 34% in an October survey, up from 24% in June.

Michigan Rising Action has compiled the top 5 reasons why Gov. Gretchen Whitmer’s disapproval has sharply increased in the past few months. All of the issues listed below were cut by Gov. Whitmer to be used as negotiating pawns because Whitmer didn’t get her 45-cent gas tax increase in the budget.

Gov. Gretchen Whitmer ran her entire campaign on “fixing the damn roads.” While the issue is still the top polling issue among Michiganders, Gov. Whitmer recently vetoed $375 million dedicated to roads in the state budget because the money did not include a 45-cent gas tax increase. Many state government observers have suggested that the Governor should have accepted the funds passed in the legislature to fix the roads and then worked on explaining to Michigan residents why she wants a gas-tax increased since the idea was shot down by both Republicans and Democrats in the statehouse.

2. Whitmer Cut Autism Funding After Saying She Would Be Their Ally

Gov. Gretchen Whitmer vetoed money for the Autism Navigators – a service that talks with adults with autism or parents of autistic children and helps connect them with medical, educational and other services. The president and CEO of the Autism Alliance of Michigan recently said, “I just don’t know why she (Whitmer) would use people with autism as leverage in a budget fight.” Many in Michigan are wondering the same thing. Of all the cuts she could have made to use as leverage for a gas tax increase, why cut Autism funding?

In Michigan, there are 150,000 public charter school students and 75% of Michigan charter school students are eligible for free or reduced lunches, and so are deemed “at-risk” students. Gov. Whitmer vetoed money for public charter schools that she did not veto for other public schools leaving many to wonder why she would target disadvantaged students. A public charter school founder in Detroit, where 51% of students attend a public charter school, asked, “Governor Whitmer, why are charter students worth less?” in a recent Detroit Free Press column. Outrage from parents and teachers is not limited to just the inner-cities, as a Holly school administrator stated: “Governor Whitmer’s decision then tells me that all the students that go to Holly Academy and any other charter school in the state mean less.” Furthermore, the president of the Michigan Association of Public School Academies said, “playing politics with our children is not a reflection of the values of Michigan’s parents, students, and teachers. We need to stop playing politics with our children and start fixing education in Michigan. Every Michigan child deserves to be funded equitably.”

$13 million in funding for the Michigan State Police’s Secondary Road Program was initialed for veto by Gov. Gretchen Whitmer to use as a negotiating tactic to get her 45-cent gas tax increased. The cut eliminated funding for 119 road patrol officer positions across Michigan – leading to concern among nearly every county Sheriff in the state. Liberal Ingham County Sheriff told the Laning State Journal that “Ingham County residents likely will wait longer for police to respond to complaints, and deputies could have to respond to calls by themselves, which increases safety risks.” The Eaton County Sheriff was also direct in his comments stating, “This thing was very bad. It’s very concerning to me that this part of the budget was cut.”

State Rep. Beau LaFave said 34 of Whitmer’s vetoes targeted the Upper Peninsula and rural Michigan, including cutting $10.7 million from psychiatric services at critical access hospitals, $34.2 million from Medicaid patients at critical access hospitals, and $2 million from the state’s first responder communications network. The president of the Michigan Health and Hospital Association said, “The elimination of funding for hospitals further exacerbates the financial burden on Michigan hospitals, primarily those that are small or rural, and threatens access to care in our most vulnerable communities.”

“Gov. Whitmer ran her campaign on fixing the roads which is still the top issue facing our state – and recently Whitmer vetoed $375 million for roads because she didn’t have support for a 45-cent gas tax increase,” said Tori Sachs, executive director of Michigan Rising Action. “Caught in the middle of Whitmer’s political retribution are at-risk students, families facing autism, public safety, and rural healthcare. It’s not surprising that Whitmer’s disapproval is sharpy rising after using critical services for real people as pawns. Our students, families and our state deserve better.”