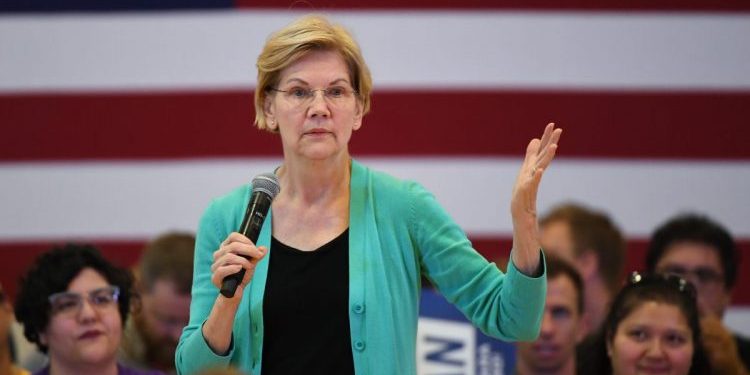 Sen. Elizabeth Warren is opening a campaign office today in Detroit – the first Democratic candidate to have a physical office in the state. The Massachusetts Senator advocates for a socialist economic agenda, banning personal health insurance, open borders, extremely higher taxes, and eliminating state rights – amongst several other radical socialist policies. Here is your quick guide to her far-left policies:

“Michigan is the birthplace of the middle-class American Dream and Sen. Elizabeth Warren wants to replace that dream with universal dependency on government,” said Tori Sachs, executive director of Michigan Rising Action. “Michigan is the battle-ground to stop far-left socialist policies that eliminate individual freedom and it’s our duty to stop those policies.”

If Warren succeeded in persuading Congress to approve all of her plans, “she would increase federal spending by roughly 50 percent.” (The New York Times, 11/6/19)

Warren’s plans “would be a sharp break with capitalism as American companies know it.”

“Taken as a whole, the Massachusetts senator’s transformative slate of social programs and tax increases could amount to the largest transfer of wealth from the richest Americans to the middle class in U.S. history.”

Economists have projected as many as 2 million jobs could be lost under a Medicare for All system.

Editorial boards argue Warren’s Medicare for All plan is “fiction” and a “populist dream.”

Warren’s Medicare for All plan could result in the overuse of health care, fewer breakthrough drugs, and doctor shortages.

Warren proposed “huge tax increases on businesses and wealthy Americans to pay for ‘Medicare for All.’”

“To finance Medicare for All, Ms. Warren would lean most heavily on U.S. employers by imposing nearly $9 trillion in new taxes on them over a decade.” Liberals and non-partisan economists note that a head tax would be regressive for low-wage employers and workers.

OPEN BORDERS AND OTHER RADICAL IDEAS

In November 2019, Warren said she was “open to suspending deportations.”

Warren’s Medicare for All plan covers illegal immigrants. “Extending public benefits to immigrants who are in the United States illegally has long been a fraught issue, even among Democrats.”