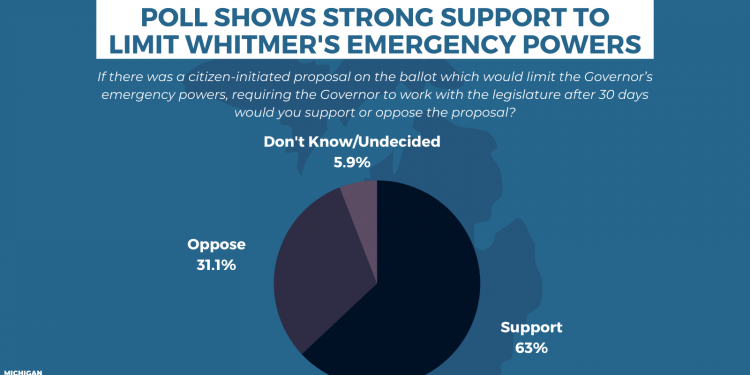 According to a poll conducted by MRG, there is strong support for a citizen-initiated proposal on the ballot that would limit Governor Gretchen Whitmer’s emergency powers. The poll results come as Whitmer declines to reinstate restrictions amid Michigan becoming the COVID-19 epicenter in the nation.

Over the past year, Whitmer and her administration have ordered some of the strictest shutdowns in the country. Whitmer has claimed credit for the low cases but has conveniently blamed then-President Trump and the people for surges and mismanagement.

New cases and hospitalizations are reaching near-record numbers in the state. And in response, Whitmer has declined to order further shutdowns, just as polls show their unpopularity. Instead, Whitmer has chalked these numbers up to non-compliant residents and variants.

63 percent of those polled supported limiting the governor’s emergency powers while 31.1 percent opposed and 5.9 percent didn’t know or were undecided. Further data from the poll showed that Whitmer’s emergency orders and shutdowns were very unpopular with a demographic more likely to vote Democrat: 18-34-year-olds.

The survey of 610 likely Michigan voters was conducted by live interview March 15-18, 2021 with a +4 Dem sample. More results and details of the poll can be found on MRG’s website.

“It’s clear that a strong majority of Michiganders support limiting Gov. Whitmer’s use of emergency powers that ordered some of the strictest shutdowns and led to record unemployment,” said Tori Sachs, executive director of Michigan Rising Action. “As Michigan becomes the nation’s COVID-19 epicenter, it’s worth noting that Whitmer has been focused on the political science and polling data. Whitmer claimed credit for the slowing of cases but refuses to take responsibility for the new outbreak or the economic destruction left in the wake of her strict shutdowns.”