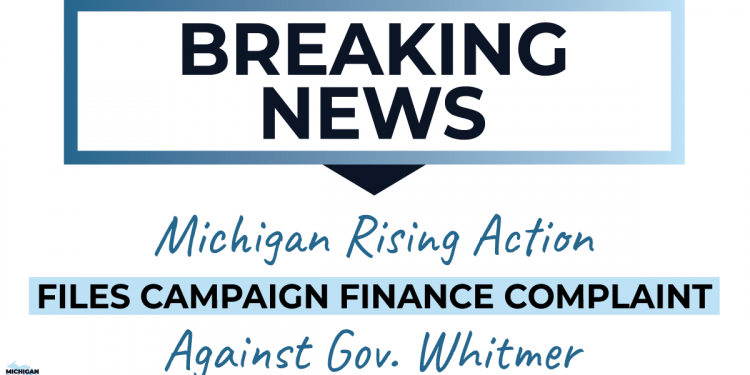 Lansing, Mich., July 26, 2021 – In the wake of Governor Gretchen Whitmer’s campaign finance report filing, in which she listed her private flight to Florida from March as a campaign expense, Michigan Rising Action has filed a complaint with the Michigan Bureau of Elections for a violation of campaign finance laws.

Michigan Rising Action referred the attached campaign finance complaint to the Secretary of State, detailing that Governor Whitmer’s personal travel on a private charter flight paid for by her campaign is a direct violation of Michigan Campaign Finance law, and should be subject to all applicable fines and penalties.

“Governor Whitmer has tried to run from her secret flight to Florida for months, and her repeated attempts to cover-up her hypocrisy have only resulted in more scandal and legal trouble,” said Eric Ventimiglia, executive director for Michigan Rising Action. Ventimiglia continued, “Whitmer’s latest attempt to pass this personal trip off as a campaign expense is a clear violation of Michigan’s campaign finance laws, and she must be held accountable once and for all for her repeated breach of ethics and the law.”

Whitmer has faced significant criticism over her secret trip to Florida, which she took at a time she advised Michiganders not to travel, and amidst Michigan lockdowns and a spike in Michigan COVID cases.

Initially, Whitmer refused to give details on the trip, attempting to keep the flight under wraps from the public. The AP reported:

“Whitmer has repeatedly refused to give details about the trip, including when and where she went, how she got there and how she paid for it, citing security reasons. She has only said that taxpayer money was not used to pay for it, that it lasted ‘two full days or less’ and that she went more than a month before April 19, when news of the trip leaked.”

Once it became apparent that this story would not go away, Whitmer tried to pass the buck, announcing that this personal flight was at the expense of a nonprofit. Unfortunately for Whitmer, this is a violation of the rules surrounding nonprofit expenditures for personal use, which is why Michigan Rising Action promptly filed an IRS complaint against Governor Whitmer for this violation. Subsequently, Whitmer announced her intention to shift the expense to her campaign, which is the source of today’s official complaint.

Michigan Rising Action’s complaint alleges two violations of the Michigan Campaign Finance Act: Section 21a – by illegally using candidate committee funds to finance a candidate’s personal expenses in the guise of an “incidental expense”, and Section 33 – by knowingly filing an inaccurate statement or report. Potential penalties include the prohibition of Gretchen Whitmer assuming public office and from receiving compensation from public funds, in addition to a requirement that Gretchen Whitmer reimburse the unauthorized expense.