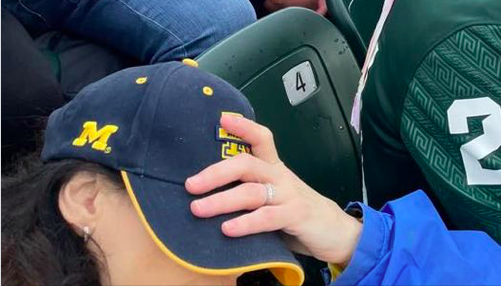 Lansing, Mich., November 11, 2021 – Dana Nessel wants the people of Michigan to believe that last night’s admission about her drunken incident at Spartan Stadium was a gesture of transparency. However, the information only came to light after Michigan Rising Action filed Freedom of Information Act requests, and details may have been made public regarding Nessel’s excessively intoxicated gameday. The Detroit News reports:

Prior to the FOIA request, Dana Nessel was silent about the incident and seemed perfectly content never to release the information to the public, finally issuing a statement the evening before a holiday and 11 days after the event. In her confession, Nessel stated “My staff has pleaded with me to hire a crisis-management PR firm”…”Instead, I thought I would just share the events which transpired that fateful day.” The disingenuous statement by Nessel is ironic, considering every action she has taken appears to be a carefully crafted attempt to conceal the truth, then control the narrative.

“If Dana Nessel intended to release the details of her drunken escapades during the Michigan/Michigan State game, why did she wait eleven days to make a statement on the eve of a federal holiday?” said Eric Ventimiglia, Executive Director for Michigan Rising Action. Ventimiglia continued, “The Attorney General’s attempt to conceal her embarrassing behavior from Michiganders completely contradicts her seemingly hollow commitment to transparency. Michigan Rising Action remains committed to holding liberal politicians like Dana Nessel accountable when they make such egregious lapses in judgement.”

READ: Michigan Attorney General Dana Nessel Gets Wasted, Wheelchaired Out of Football Game: ‘Sometimes I Screw Up’ For more details.